No. 73 took the idea of character and storyline much further than Satkids TV ever had before. Producer and deviser John Dale succeeded in introducing the elements of “character and place” into the traditional magazine programme format, creating an “adult world into which the audience was invited on Saturday morning.” This world was inhabited by a late-Neighbours style non-nuclear family - but with a difference.

TV Times (16-22 January 1982) summed up the show as follows: “From the outside No. 73 looks like a tumbledown house, but once inside it’s a different world. The house, in the south of England, is rented by an eccentric old lady called Ethel, who is like a fairy godmother to the children in the area. Each week she opens her door and is visited by superstars and famous personalities who provide a madcap spectacle of music, competitions and fun. Ethel is assisted in looking after her guests by her nephew Harry and her boyfriend Percy.” 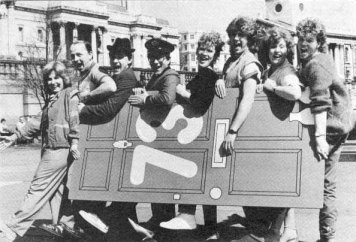 The other main character was roller-skating ginge Dawn Lodge. Between them the cast covered all the archtypes likely to appeal to juvenile scruffs - wacky aunt, big brother, big sister, and a nutcase (Percy) for good measure. Authoritarian parental figures were included in the shape of next door neighbours Hazel and Martin Edwards (although the spin-off series, No. 75, never materialised).

Around the standard requirement of guests traipsing mud into Ethel’s kitchen were threaded plots, and in retrospect these were the programme’s main appeal. During the course of the series the tenants of Number 73 had to contend with roadbuilders, creditors, Ethel’s ill-advised and aborted marriage to her boring Bank Manager, and ultimately the termination of their tenancy before bulldozers moved in - to name just a few of the more major horrors thrown in their direction.

73 started life in early 1982 as a temporary replacement for TISWAS in the TVS area only. It returned that summer for a second try, and finally became both permanent and networked in 1983 when it became clear that ITV had no better ideas. Various changes were made in the third series, when the show moved from the TVS base at Southampton to the new Maidstone Studios (with an address change that confused many of the more gullible viewers). Ethel also regenerated into a more youthful incarnation and Percy regenerated into Alec Simmons, developing a Scottish accent along the way. Actor Patrick Doyle soon left the show, and to this day refuses to admit that he was ever in it. His replacements, scouse doodler Neil Buchanan and future Eurovision hopeful Kim Goody, fitted the formula better, to the extent that they were allowed to play themselves rather than wackily monickered alter-egos. The following year the annoying local brats that infested the house were finally ditched, all of which enabled the program to settle down considerably from a creaky Southern-style production to a slick and enjoyable flight of fantasy. 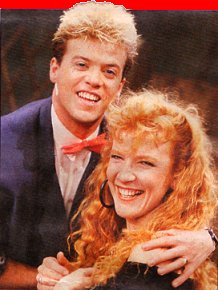 Slick that is, apart from the acting. Nick Staverson’s enthusiastic portrayal of Harry Stern, perpetual 80’s fashion victim, was desperately well intentioned, but his abilty to remember the script didn’t quite match up, with the result that his amusingly recast sentences became something of a trademark. Even so, his acting at least engendered some semblance of interest. Neil Buchanan stuck so closely to his lines that each carefully scripted ad-lib was quite obviously exactly that, resulting in a persona more leaden than the average chruch roof.

One drawback of the show was its blatant air of provincialism. None of the stars were hugely glittering, as the "House Party" style of interview made clear. The format of the show did at least provide for swift termination of celebrity dullness: “Oh, sorry to interrupt - I’ve gotta go and answer the door...”

Indisputably the best thing about 73 was Sandi Toksvig. Her talent as a deadpan comedian allowed her to play Ethel perfectly straight, and during her tenure as landlady the character comedy and interplay was far more low key, subtle and occasionally sly. (Toksvig was also by far the best adlibber out of the cast, even if she did have to drop completely out of character to do so.) Even the am-dram films provided by Front Door Productions, liberally seeded with bad puns and with obvious gags lurking around every corner, were underplayed enough to be funny.

Sadly, after Ethel’s unexplained departure in 1986 the restraining hand on the tiller vanished. The show tried to reinvent itself to avoid the gaping hole left by her departure, with several new characters drafted in to allow the series’ existing staff to take shifts on a watered down extra edition on Sunday (recorded immediately after the live Saturday edition by a less than enthusiastic cast and crew), while Harry took centre stage as man of the house. Of the later additions to the cast, only their new neighbour, the twitchy, badly dressed Hamilton Dent (Richard Waites), showed any inspiration. 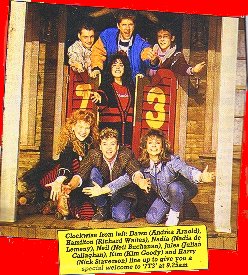 The collapse of the programme was mirrored in the story as the budiling began falling down and the gang faced eviction by their unscrupulous landlord. They needed another home and fast; with production of the vaccuous but ratings-grabbing Catchphrase now a priority, 73 took TVS's biggest studio out of action during its transmission period since the sets were permanent.

Thankfully some bright spark thought of taking the Coronation Street route and building an outdoor set - planning permission sought and obtained. Somehow, though, a strokey-beard meeting turned the idea from good one - take what you got and put a lid on it - to a rather crap one: “Hey! Let’s build a wild-west park in Maidstone!” So it was that the bulldozers moved in and the team took control of 7T3 (?) in January 1988.

Sadly 7T3 was flawed: the suspension of disbelief became intolerably stretched, production standards deteriorated; even the kids moved back in. Ultimately, and perhaps even thankfully, the outdoor set proved too expensive to maintain and three months later 7T3 finished, never to return.