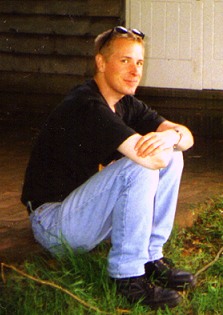 Hardly worth the wait, but here they are anyway. Now includes V2001 and my 30th birthday.

Wow, we finally made it back to Canada. Olley and myself, that is - Dave was saving for his wedding so is excused the expense, not to mention the extra hassle of having to put up with AJ for a week. Anyway, there's not that much to share with you as the whole idea (mine at least) was to do as little as possible... but this is how we did it.

More pictures from my wide-ranging life. See me, Scotty, Foden and Mr Miller arsing about with TV's popular the League of Gentlemen!

I submitted my mug to the famed Internet Rogue's Gallery, and this is what the general public thought of me...

A handful of pictures which give you a fair idea what my recent week in Tenerife consisted of. In. Whatever.

I was fortunate enough to assemble a phalanx of my best friends to celebrate my 29th birthday back in November. To find out who they were, click above!

Recently I went to V2000 with Barry, Vicky and Charlie. Great time had by all, etc. Anyway, just a handful of piccies as of yet - taken on one of the 25 crappy Orion Motor Insurance "Incident cameras" I was given when they sacked me. You woudn't believe how much work it took to make the one of all four or us look any good at all.

We're going back over next spring, so to psyche myself up I thought I'd write up a belated report on our fondly-remembered (apart from the near-death experience on the motorway) 1998 trip. WARNING: Some of the photographs are of poor quality and not worth the download time. 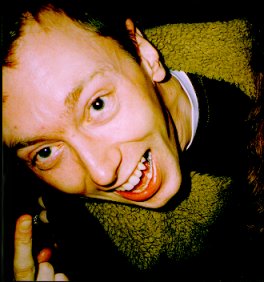 Self-explanatory. Pictures of my mates in Dover and Canterbury, ex-workmates, ex-girlfriends, friends from 'uni' - oh, and family. Also various flattering and non-flattering pictures of myself.

Now that my writing career has finally mutated into a 'Writing' 'Career', thanks to the ineluctable Mr David Miller of Shivers magazine, I thought it would be worthwhile detailing the other gubbins I've produced, outside of this net we call inter.

They got me working for the man  Updated 8th June 2000

If you're thinking of giving me a job, perhaps a look at my CV will convince you otherwise.

The SADder side of life Updated 28th November 1999

I edit a fanzine for cult tv fans - the Strange and Dedicated, as I call them. It's called SAD Magazine. It has its own website, but if you click on the orange lettering I will introduce you to the whole phenomenon in a painless way.

Music is one of my favourite things. Well, who can't say that?! Apart from Dave Lee Travis, Gary Barlow and the like. But maybe you'd like to see what I've been listening to recently, or find out my fave bands, albums and songs of all time?

Books and lit. are another of my favourite things. Here you can see what I've been reading recently, or find out my fave authors and novels of all time.

Rabbiting on about the less useful aspects of the English language is another of my favourite things. Join me in a spirited exploration of various points of grammar, punctuation and general anally retentive pedantry - or perhaps you're as bad as I am and would like to suggest a topic for discussion!

Now updated with some priceless advice from my colleague Nick "I admit it, I'm a doryphore" Flynn and his lovely lady wife.

Now reorganised into themed sections for easy access! Namely: Television and film; Yumour; Science-Fiction, Fantasy, Horror and That; My Chums; Music; and Miscellaneous. Now there's no excuse for not making this site your homepage - your one-stop link to the best the internet has to offer!!!

Credits, kind of. Also features links to, and pictures of, all my mates herein listed.

Maria was my own personal recruitment consultant, and we were such a team as you wouldn't believe! Find out what kind of woman could turn my head in such a way, here!

Luckily, that's all I've done at the moment. You see, I do have one or two better things to do. Written proof of this is available on request.